Every morning I get a thought of the day delivered to my phone from Real Simple magazine. Most of the time, these thoughts of the day inspire me through my own day. Sometimes they make me giggle. And sometimes I have no earthly idea what they mean. But yesterday’s thought of the day touched a nerve and has kept coming back to the forefront of my mind. Because this thought of the day summed up life around here lately….

Since February 26th we have had one heart attack, complete with and eight day stay in the hospital. We’ve had three surgeries. (One of the surgeries was part of the heart attack repairment plan.) One was to repair a torn meniscus. And one was minor, so very minor (it was to get rid of a pyogneic granuloma on a finger), but it was still surgery nonetheless.
From February 26th to March 6 I was back and forth to the hospital untold numbers of times to visit my dad after his heart attack. I tried to make sure my mom had dinner on the nights when she was exhausted from sitting with my dad waiting to talk to doctors, waiting for results or just keeping him company. I tried to make sure to have dinner at their door after my dad came home, and when I knew my mom was bottoming out on energy. I’m fortunate, so very fortunate, that my parents are here and I’m able to force my help on them because my father will never ask for help and he will make sure my mom won’t overstep her “bounds” by “imposing” on us.
Since March 14th I’ve had Lucas home, on and off (but mostly on) since his surgery to repair his knee. He had a torn meniscus and it was far worse than we anticipated. He had an MRI so we knew it was damaged, but Lucas, being Lucas, didn’t sit still during the MRI (he says he was never told to stay still so he didn’t), so we didn’t know how bad the tear actually was until the surgeon got in there. Once in surgery he saw that Lucas had a near bucket handle tear of his meniscus, which is now stitched together with four large sutures. Lucas has been a model patient. He listened to the doctor, stayed off his feet, kept his leg elevated and kept the ice pack flowing over his knee. He’s kept the brace on and is behaving. And for the first time in a long time, he’s letting me help him. He can’t do it all alone and I think he’s enjoying (secretly) being doted on just a little. Lucas is the one who doesn’t ask for much help and thrives on doing as much as he can for himself. So I’m glad he’s letting me help and baby and love on him a little.
Yesterday Claire went under the knife, and general anesthesia, for her procedure. It was an easy enough procedure, but the drugs used to put her to sleep made her woozy, groggy and feeling altogether blechy. I got her home from her procedure, tucked her into bed to let her sleep off the effects of anesthesia. But not long we got home, and right around the same time Lucas was delivered home to me by my mom, Claire texted and asked for some water. I obliged and seconds later she went running for the bathroom where she promptly emptied the water from her stomach. ‘Nuff said. I tucked her back in our bed and gave her the remote for the TV, and told her I’d bring food after her tummy had time to settle a little. Claire, too, prefers to be a little self-sufficient in most aspects of her life, but she has let me help her, cater to her and take care of her a little.
I can’t tell you how much support and help I’ve gotten since these events all started and seem to keep going like a wildfire burning. I’m not sure I would have survived without my friends asking me about my dad, checking up on me, sending dinners, sending love, sending little care packages for the kids and just all around being there.
But yesterday I saw this and thought, “This is the ‘help’ I need….” 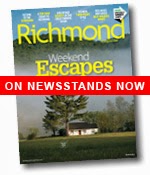 I bought the magazine, brought it home, showed it to Stan and told him, “This is what I  need.” And then the guilt hit a little, because I know there are so many others who have it so much worse than I do. I’m lucky and blessed. I have help  when I need it (and even when I don’t know I need it) and I’m able to help when I need to. It’s part of being human and, I guess it really is part of nature’s “laws.” This is what we do. We help when we can and we’re helped when we need it. And I’m glad I can.
Oh, for the love of all…