Lucas has been asking for quite some time to go back to the optometrist and try contacts again.  He has tried twice before but with no success.  The first two times saw Lucas frustrated, scared and upset.  He couldn’t do it.  He couldn’t get past his wicked blink reflex or his long eye lashes.  He worked for hours trying so hard to make it happen and it just didn’t.

Today was different.  He was still scared but determined.  His motivation ~ he wants to play hockey without glasses.  That’s a good motivator.

He worked with the fantastic team of ladies from our fabulous optometrist’s office.  They were patient and kind as he struggled to put his contact lenses in.  His blink reflex was still strong and his eye lashes are still long but he worked and worked and worked.  I could see the sweat forming on his brow as his determination grew.

Lucas was actually not successful at putting the contacts in himself but he was able to let someone else do it for him and he did great getting them out so they sent him home with his new contacts in his eyes.  He needs to practice, practice, practice they said.  Lucas is more determined than ever to make this work now that he “sees” how well they work (my weak attempt at a pun…). 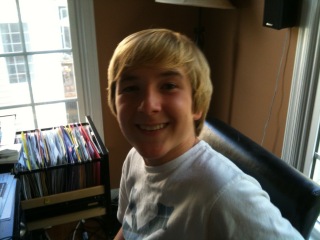 ﻿Lucas came home from the optometrist and immediately headed for Facebook.  Picture and all are now proudly displayed in his status.  He walked into the rink tonight for hockey practice with his head held high and ready to take on the ice with new-found vision…He’s a blooming visionary!
I am so happy for Lucas.  It’s been a long time coming for him.  He tried and tried and tried.  One of my friends, Yasmin, commented on our Pefect Mamas Confess quote of the day today and she said “Persistence, perseverance and patience….never fails!”  That was Lucas!  I know he’ll stick with it.  He’s like a bulldog, when he gets ahold of an idea or something he wants to do he doesn’t let go.
Oh, for the love of my children…