On of the things I love most about myself, is that I have the craziest dreams. And I do mean crazy. Vivid and detailed, they tell stories I could never imagine in my waking hours. My family indulges me in the mornings when they come downstairs for breakfast and I say, “I had a weird dream last night.”

Those are their responses, and then they listen quietly as I go on to tell them every, minute detail about the dream that woke me from my sleep…actually, I’m pretty sure they just pretend to listen, but sometimes they catch on to a word or two and nod enthusiastically to make me feel like they’re paying attention.

So, here’s how any given morning progresses ~
“I had a weird dream last night…”
“WHAT! No WAY! That’s crazy!”
“I know! So, last night I was in Philadelphia, and you two were with me,” I say pointing to Lucas and Claire. “Dad was there too, but Zach wasn’t. We were walking through the streets. It was chaos and pandemonium. People were running everywhere, trying to get away. There were cars splashing through muddy potholes. We turned this corner, onto this wide street, and just down a little bit were Daryl Dixon and Rick Grimes,” I say, nearly swooning (they know Rick is my “boyfriend” and they all (including Stan) go along with my little fantasy). “They both have their guns drawn, but not at us…just in general. They’re standing next to this old, silver lincoln town car, when all of the sudden these little pink ufo’s descend from the sky and start dropping bubble guns down to the people on the street. It’s all fun and games until the bubble guns start popping on people’s faces and their skin starts to blister. It’s then we realize the bubble guns are loaded with the outbreak virus. All of us start yelling at everyone to drop their bubble guns and stop shooting, but it’s too late…”

They probably didn’t hear the whole thing, but they heard enough to know it was a very. strange. dream.

Sometimes, though, my dreams really speak to me. Words, made up words and phrases, pop in my head. Last night was one of those nights, and my dream was a true gift. I got to hold on to a new idea, a new phrase. I’m going to take it and run with it.

I recently wrote a blog called Rambling thoughts on how I just need to be a little brave. Last night showed me, that in some instances I need to hold fast to cosmic courage. As soon as I woke up this morning, I went to the dictionary. I needed to feel those two words and grasp the deeper meaning behind them.

See more synonyms on Thesaurus.com
1.
of or relating to the cosmos :
cosmic laws.
2.
characteristic of the cosmos or its phenomena:
cosmic events.
3.
immeasurably extended in time and space; vast.
4.
forming a part of the material universe, especially outside of the earth.

The third one. That’s the one. Immeasurably extended in time and space; vast.

See more synonyms on Thesaurus.com
1.
the quality of mind or spirit that enables a person to face difficulty,danger, pain, etc., without fear; bravery.
2.
Obsolete. the heart as the source of emotion.

Yes! The quality of mind or spirit that enables a person to face difficulty, danger, pain, etc., without fear; bravery.

This! This is what I want. I want to be vastly brave. The thing is I don’t have to be vastly brave every day. I just need to be a little brave every day. But sometimes when it comes to writing and sharing my stories with you, I need to be cosmically courageous. I started this blog almost six years ago, and have published one book (with more sitting in the pipeline). After all of these years, a dream finally made it clear to me that telling stories is sometimes the scariest thing I’ll ever do.

So, for the love of my children…every now and again I’m going to be cosmically courageous. I only have to be vastly brave one day at a time. Tomorrow, if I want, I can go back to being just a little brave. 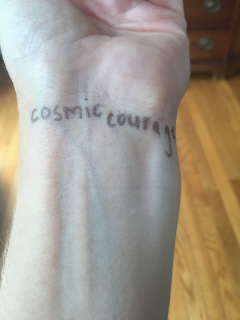