Last weekend I did something big. It’s been on my list of things to learn for a long time. And so I did it. Zach was the impetus for me acting on my desire…

A few months ago he came to me and said he wanted to buy a motorcycle. Years ago I told him he could get one over my dead body. And then he grew up. He became a responsible, young man who takes his safety and that of those around him very seriously. He duck hunts. He shoots guns. He understands the heavy, heavy responsibility of gun safety. He drives the speed limit. He is cautious behind the wheel. He doesn’t drink and drive, instead he finds a ride, using Lyft, Uber or Cluber (Claire Uber). He’s proved himself to me in the responsibility department, and so I gave him my blessing. He found his dream bike, bought it and got it home. It sat in the garage, beckoning him. He knew he needed to take a rider safety course to get his license.

He didn’t want to do it alone, he said. It’s very high on the list of things I want to learn, I thought. So why the hell not? “I’ll do it with you,” I told him. He wasted no time registering us for the weekend-long class. And it was done.

We were going to learn how to safely operate motorcycles, together… 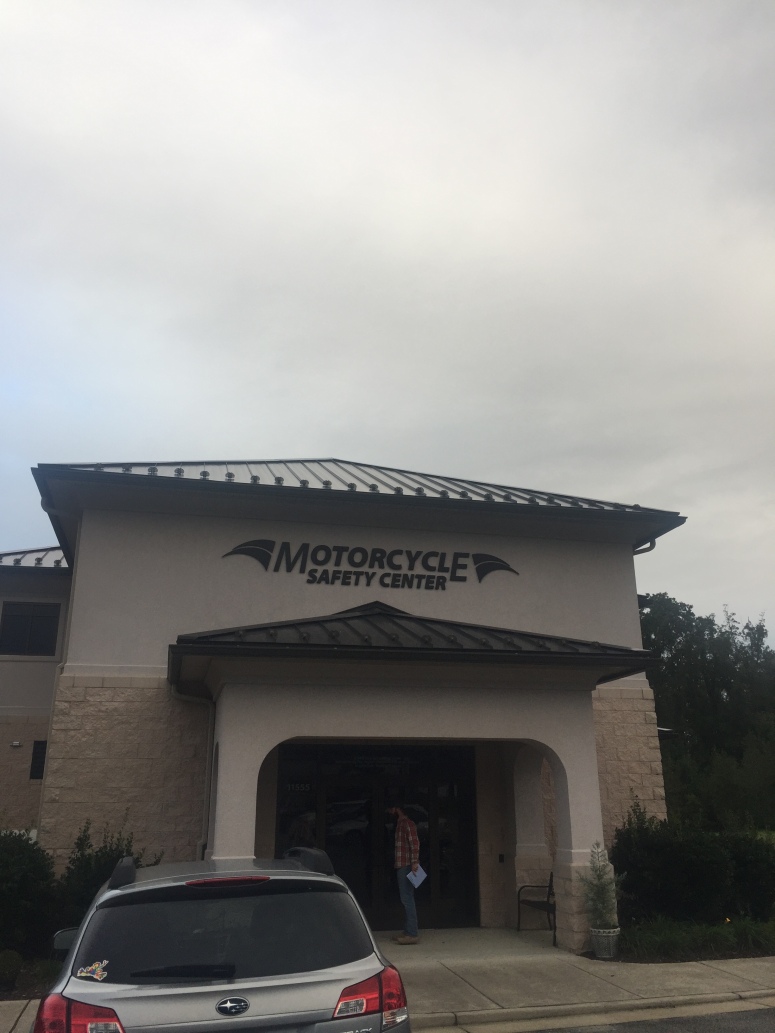 While this was something I really wanted to learn, I was beyond nervous thinking about the entirety of the experience. My entire being hummed from top to toe, with anxiety roiling through my belly causing ripples of fear to settle inside, making Saturday’s dawn seeming brighter and earlier than it actually was. Zach and I left the house at 7:15 to make sure we would be there by the 8 a.m. start time. We were assigned to our groups and took our seats. I was one of two females in our 11 person group. And I was the only one with curled hair, make up done and a cashmere sweater on. I’ve gotta say I’m must have looked like a complete, albeit nervous, priss as I sat in motorcycle class that morning.

We started our three hour classroom instruction, methodically going through the work book. Soon it was time to break for lunch. Zach and I found the nearest Chik-Fil-A and debriefed a bit on what we were learning, as we sat enjoying the deliciousness of the chicken sandwiches they serve. My nerves were jangling, knowing the next several hours were going to be taken up by actually riding a motorcycle. Me…controlling a motorcycle all by myself!

Once back at the motorcycle safety range we, put all of our gear on (helmet, eye protection and gloves) chose our bikes and were instructed how to begin. Our first exercise was to walk our 300 pound bikes back and forth across the length of range. (Did I mention I was wearing a cashmere sweater?) Sweat was dripping down my back and off of my freshly curled hair which was now smashed down under my helmet. But I kept on with the exercise. Back and forth and back and forth. Just so you know…300 pounds is a lot under the weight of a blazing sun and a cashmere sweater. One of the rider coaches had pity on me and helped me turn my bike around whenever I was back on his side of the range. The struggle was real.

Class continued with us finally mounting our bikes and crab walking them back and forth across the same stretch of range that we had been walking. That wasn’t any easier and, again, did I mention my sweater? What was I thinking when I got dressed that morning? The fibers clung to every droplet of sweat that poured off of my back, sending cool, wet rivers flowing over every inch of my torso. But I wasn’t giving up. Even when the rider coaches said, “Sometimes people find, once they start that this isn’t for them. If that’s you. It’s Okay.” I’m pretty sure he was talking to me, in my mashed down, formerly curled hair and my soaking wet sweater. The prissy one who came to class all made up.

Here’s where the fun starts and I began to have serious doubts as to whether I could do this…We actually had to let the clutch leverout, feel the pull of the engine and begin to engage the throttle. Well, shit. I now had to drive the 300 pound behemoth, with my feet off the ground and on the foot pegs. Zach told me later he didn’t think I was going to make it, but my cashmere sweater and I kept plugging along. I wasn’t going to let Zach down and I certainly wasn’t going to let my prissy ass self down.

Day one mercifully ended, with my hands, wrists, thighs and back aching from the day’s activities. At one point during the day, my thighs cramped up from working so hard trying to keep myself upright. My brain was on fire with everything I knew I needed to remember for the next day’s class, test and skills’ assessment. Relief flooded my entire being.

Day two dawned with me realizing that I had to go back. (I didn’t get to go back, I had to go back. There’s a big difference in those two words!) I also realized my hair didn’t need to be curled,  and sweaters were now banished from what I now considered proper riding attire. I went into the day with not much hope of passing theskills’ portion, but by God I was going to do my best.

We finished the classroom portion. It was written test time. I was a bundle of nervous energy. I don’t like to fail. And certainly not publicly. If I didn’t pass this portion I couldn’t continue on with the skills. If I didn’t pass, I’d be excused from class. Publicly. “Please just let me get an 80%. That’s all I need. Just 80%,” my prayers went up to the motorcycle gods. The moment of truth came. Our instructor began handing out tests. Mine was the first. I put my thumb over my score. And I peaked. I got a 100. A freaking 100%…I couldn’t believe it! But the pit grew in the bottom of my stomach as I realized this meant I had to go on to the skills assessment portion of the day. I didn’t hold out much hope for myself. But kept repeating to myself, “I’m going to do my best. If I don’t pass, it’s because I truly don’t deserve to.”

Our instructors stepped from their rider-coach role, to testers. It was time to show what we could do, as some of their more acerbic quotes swirled in my head…

“Jennifer, why did you wait until you were almost in the woods before completing that turn?”

“Jennifer, I’m glad you didn’t end up in the woods and we had to come searching for you.”

“Jennifer, at least you didn’t run me over!”

“Jennifer, why in God’s good name do you think you should be on this range, and why would you ever think you could get a motorcycle license?” Nobody ever said that, but I’m sure as day one drew to a close they were thinking it!

I had to shake those thoughts out of my head and focus on the positives of their instructions. Because…

The first thing up was a figure eight u-turn inside a tiny box. My mind reeled with everything our rider coaches told us, “Putting your feet down gives you more points than going outside the lines.” All I could think of was one of our instructors yelling to me, “Jennifer, why are you putting your feet down?” in a very southern drawl, and me loudly responding, “Because I got scared!” Crap! Now I had to do it without touching the ground or dropping the bike (to be clear I didn’t drop my bike, not even when I was dragging it across the range.). Saints be praised, I did the u-turn without putting my feet down, and I got in line for the next skill, then the next and we were done!

I’m proud to say I passed the skills portion and am now the very prissy, and overly proud holder of my M-2 motorcycle license. Next up for me and Zach, conquering the M-3 skills so we can ride the trikes! And I promise I won’t show up next time looking like I’m ready to stroll into a museum,  or go shopping and then to lunch with my girlfriends. I’ll show up ready to take on the Spiders and the Harley tricycles of the motorcycle world! I want to be a true badass! Although, I’m not sure I can completely banish the priss from within, so I may just have to stick with being a prissy badass! 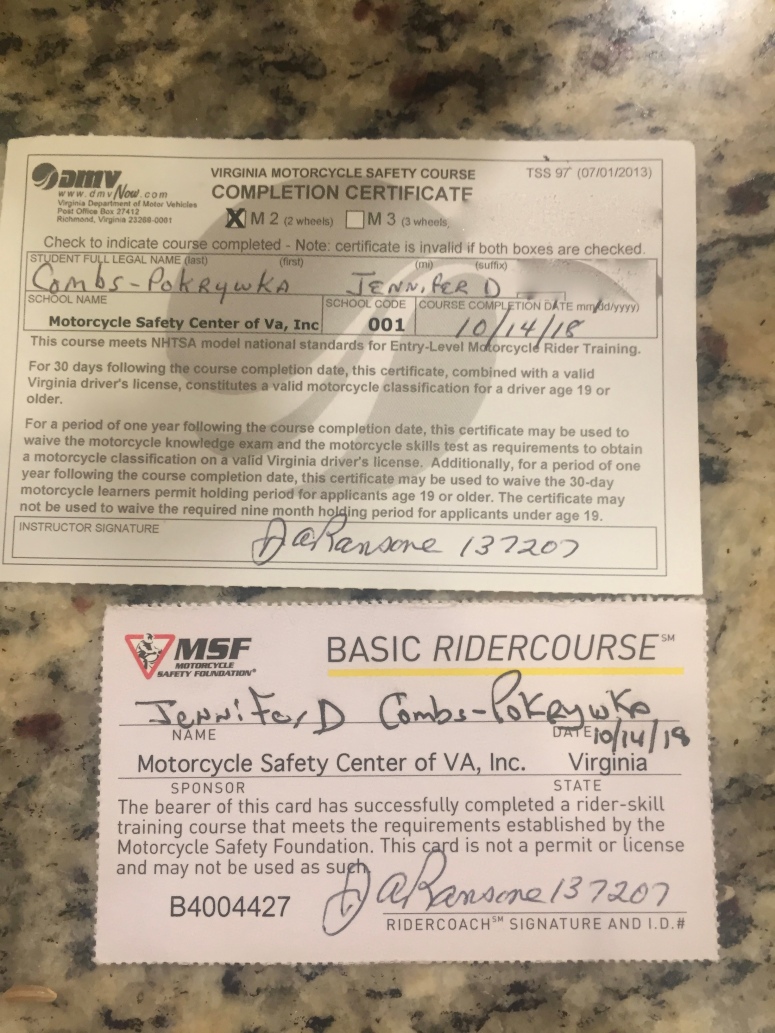 Oh, for the love of my children…

2 thoughts on “A prissy badass”