Last week was the kids’ spring break.  We kinda took it easy and just relaxed…we busted our butts all year long so this past week was a week to regroup, refocus and head into the final nine weeks of school feeling refreshed.

We did do a couple of things here and there.  I took Claire to the movies.  The boys went fishing…day after day after day of fishing.  And in the end, they were mostly happy with hanging out and relaxing.

Lucas’ only request was to go to King’s Dominion.  He wanted to dominate The Dominator and be intimidated by the Intimidator.  Two of the biggest, baddest, scariest roller coasters and Lucas was determined to ride them both.  I let him invite a friend to come along.  I decided it would be awesome to just hang out with Claire so I didn’t even give her the option of finding a friend to tag along.  The four of us loaded up and headed up I-95 to conquer the amusement park.

But I learned a couple of things about myself and the kids while we were at King’s Dominion with the three kids.

1.  The best thing to do is to let the boys go off by themselves…they’ll have a much better time.

3.  I used to think I was only afraid of two things in life but now I think I can add that I’m pretty sure I’m  afraid of heights.

5.  Claire is definitely afraid of heights and big roller coasters.  Can’t you tell by the look on her face as we are standing in line for The Dominator?? 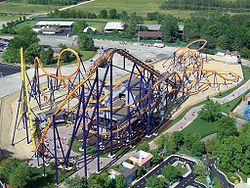 6.  The little rides are not so bad…Claire and I had a blast playing Ghost Busters on the Boo Blaster. 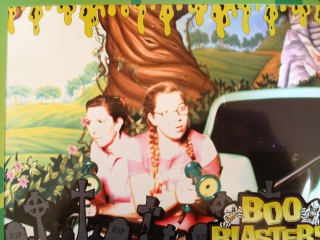 7.  My feet and legs hurt at the end of the day from all of the walking.

8.  Amusement parks are a good way to wear everyone out.

9.  I’d go back in a heartbeat.  There are other rides I want to try and conquer ~ I want to get over my fear of heights!!

10.  Claire has no desire to get a season pass or get over her fear of heights…Lucas however is all over it!  He is my fearless one and he’ll be the one to go back as many times as I’ll let him.

Alright, so maybe Claire and I didn’t dominate or intimidate anything but what we lacked in courage, Lucas more than made up for with his bravery.  He dominated the twists, turns and loops of The Dominator and he didn’t allow The Indimidator to intimidate him…God love him because it scares the shit outta me with its 300 foot drop at 85 degrees…I think I’ll keep being intimidated by that one!!